For his exhibit entitled Fiction of the Fabricated Image, Korean artist Seon Ghi Bahk has cleverly repurposed small pieces of charcoal into remarkable suspended installations that explore the often-complicated yet interdependent relationship between natural and man-made environments. 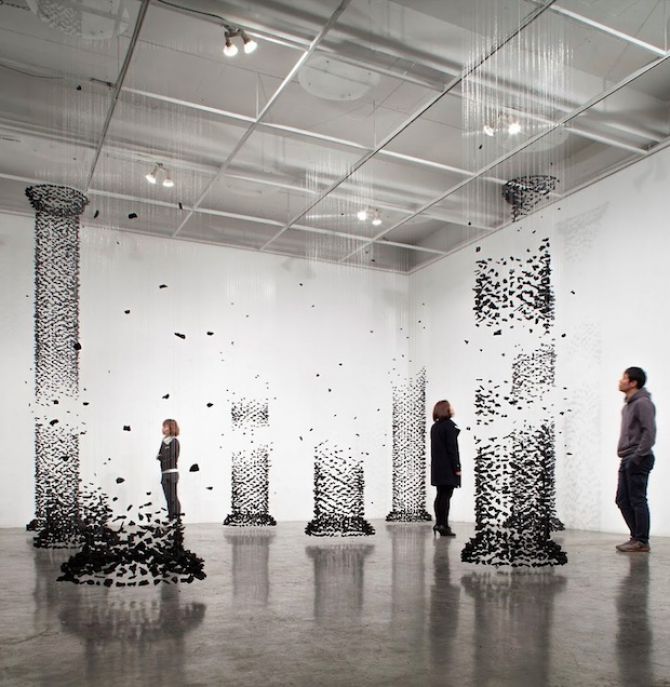 While the hundreds of palm-sized pieces of burnt wood in Bahk’s artwork are of the natural world, the shapes that they form – after he suspends them from the venue ceiling using nylon thread – smack of a human-made environment: pillars, columns, stairs, arches and pagodas. 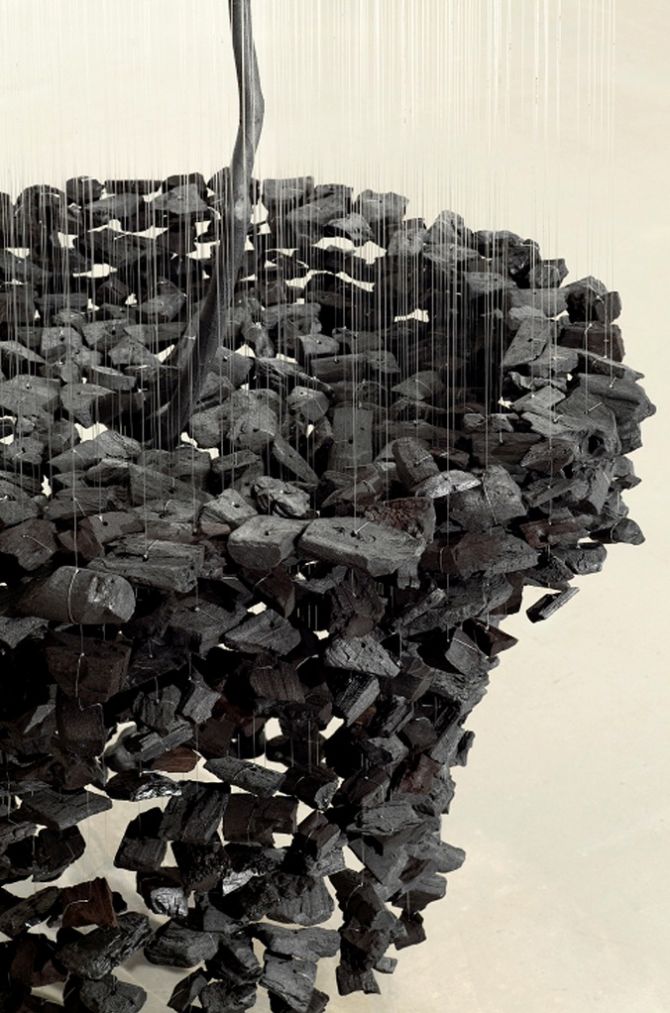 “Since I spent my childhood out in nature, I wanted to embrace natural things in my work,” says the Seoul-based artist. “I was born and raised in a remote rural village – there were only four households in it. My parents would be away tending crops, my brothers and sisters away at school and I would spend time alone. 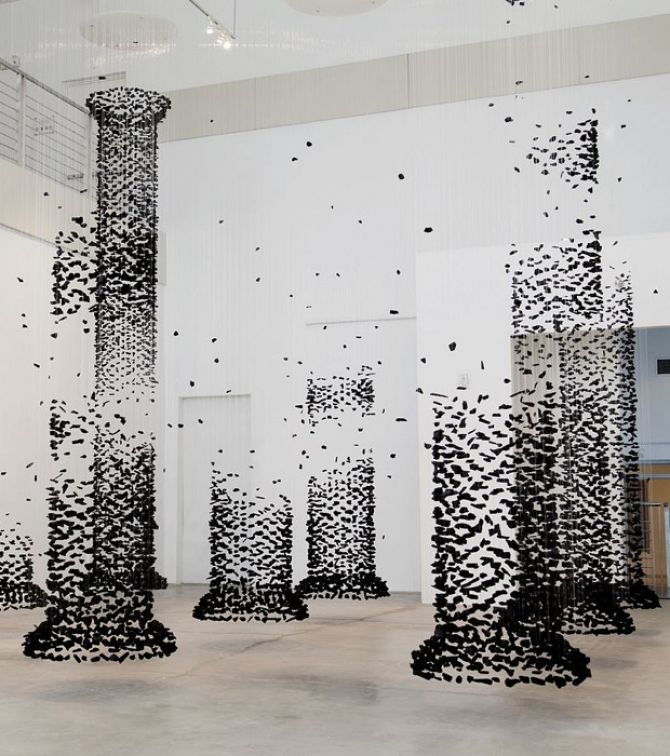 “Everything I saw around me were the same mountains, the wind, and trees and I think these became the basis of my artwork. It was difficult to express wind or mountains in my art, so I chose trees as an alternative, and the charcoal derives from that.” 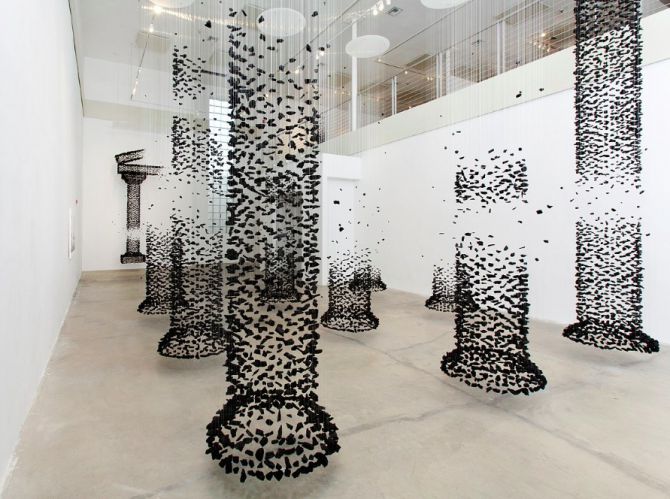 Bahk first used stones as his material for the installations. But the supporting structure and installation became excessively large and overwhelmed the stones, so the artist replaced stones with charcoal. 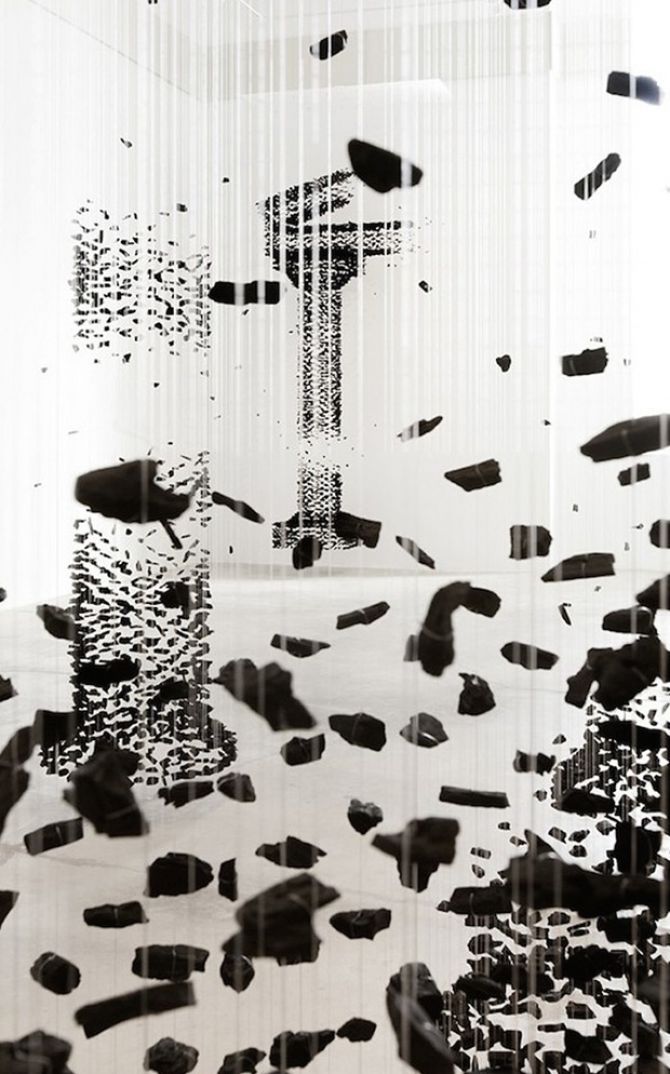 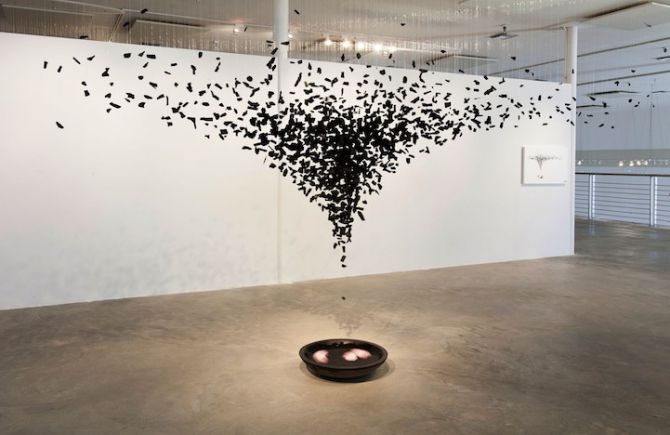 To achieve his dangling 3D masterpieces, the 45-year-old artist fits individual pieces of charcoal with nylon-thread and then hangs them at varying lengths from the ceiling. 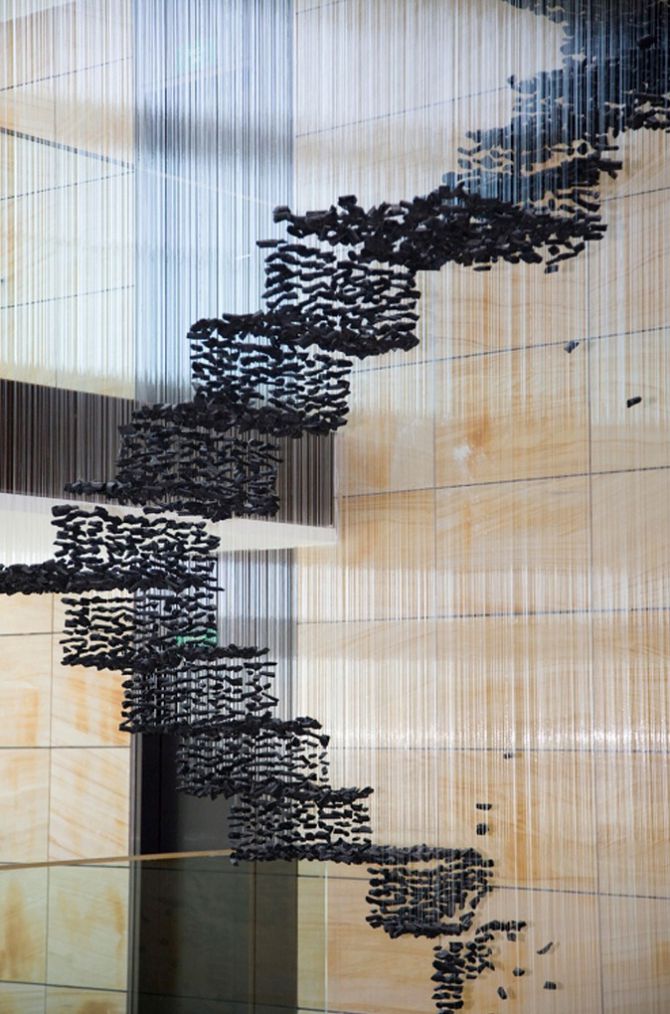 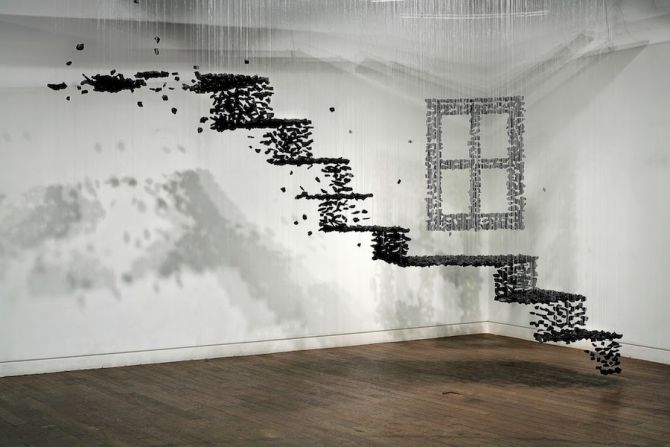 “I had lived in a remote village, but I worked in Seoul, and actually wanted to explore the mutual relationship between nature and man,” he says. “For this I incorporated [into my charcoal artwork] architectural elements such as pillars, staircases or arches.” 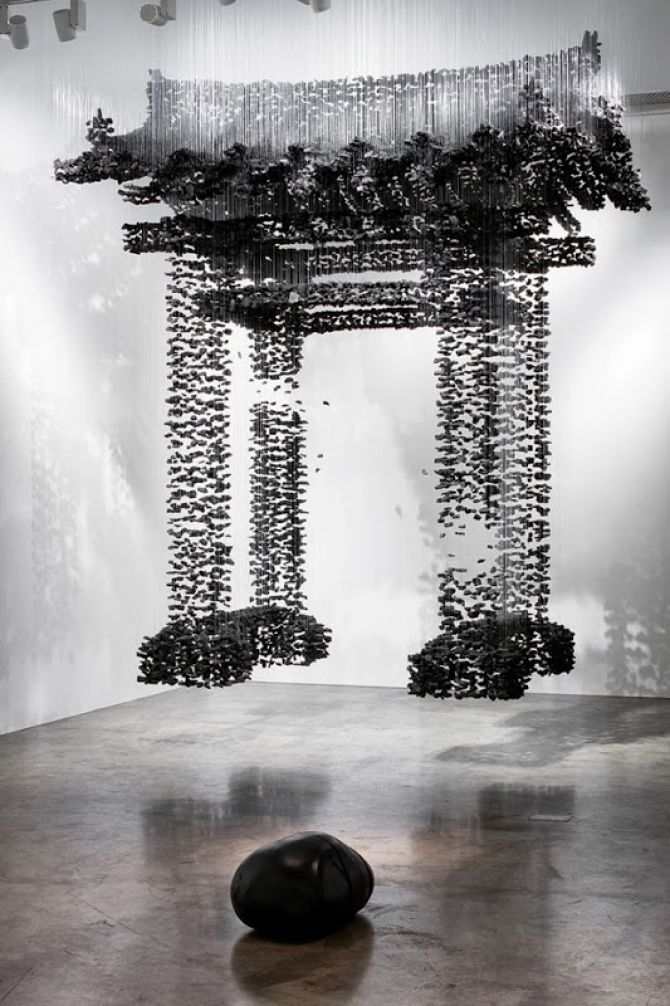 He adds: “I try to emphasise the material in the poetic shapes of my charcoal installations – whereas with my sculptural work I emphasize shapes so that material properties become unnoticeable and the work becomes painterly.” 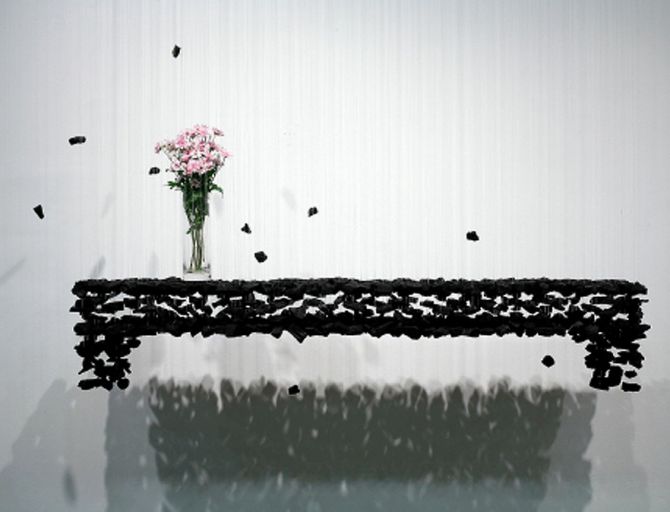 Watch this video below in which Seon Ghi Bahk talks about the differences between his suspended charcoal installations and his sculptural work.

A sort of three-dimensional pointillism, the suspended charcoal installations have a light, airy effect and appear as if they are structures in the process of being formed, or disintegrating. 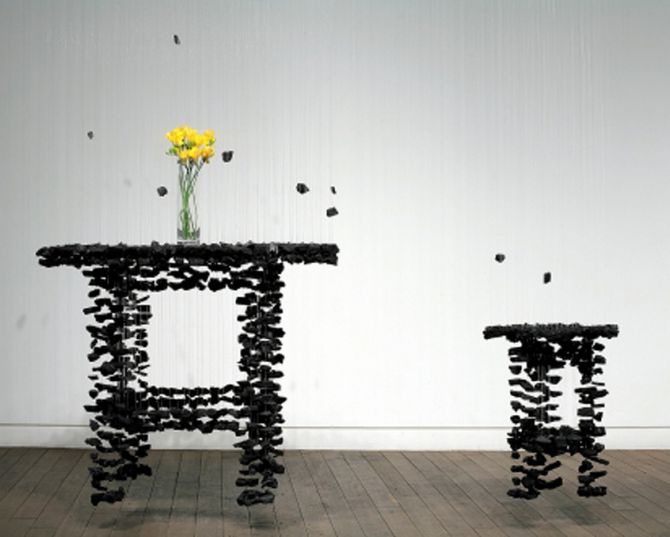 Some of the architectural themes in Bahk’s Fiction of the Fabricated Image are no doubt inspired by his time spent at the Accademia di Belle Arti Brera in Milan where the Korean trained as a sculptor. 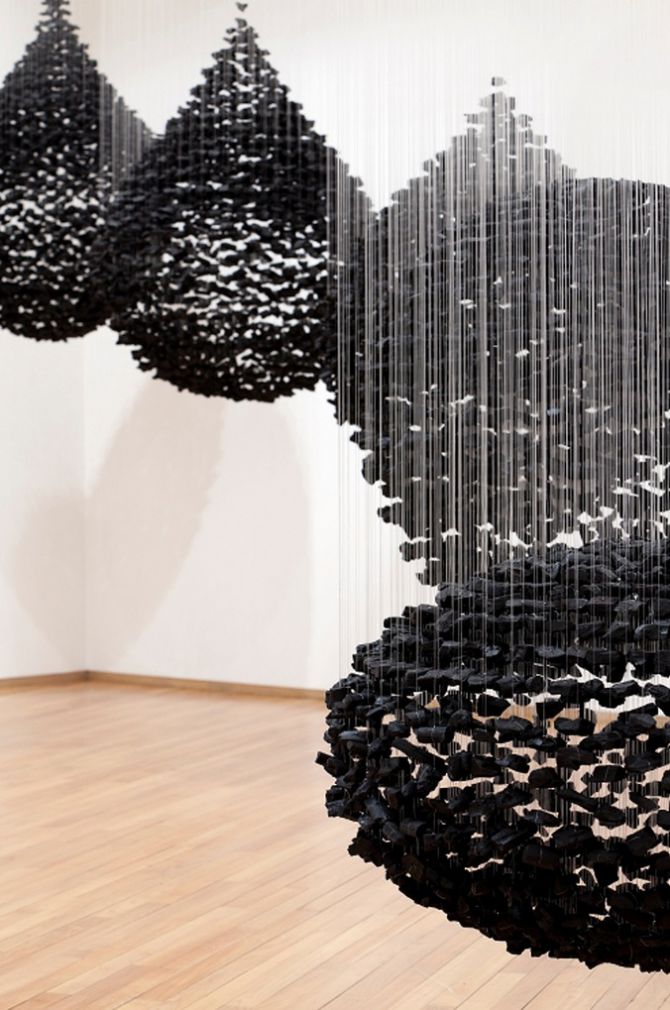 His reconstructed columns and archways look as if they have been plucked from ancient Roman times. 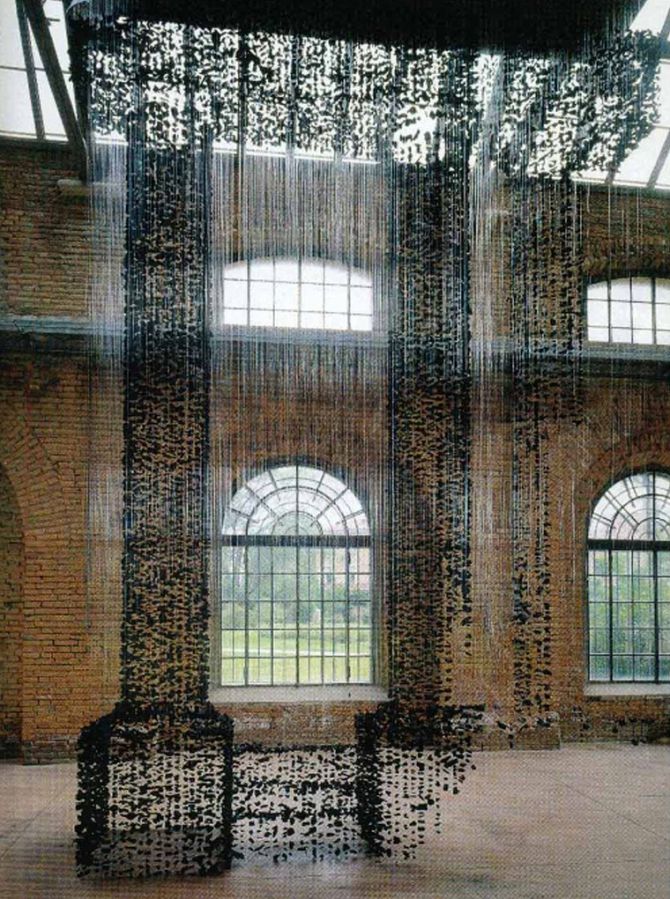