A rounded, compact body of titanium, red gold or microblasted stainless steel with black PVD coating. Two prominent aluminium time-display “eyes”, rolling at anyone who dares look its way. A collar studded with projections that allow you to wind the mainspring or set the time. Stout but flexible “legs” that wrap firmly around your wrist. Just like the creature for which it is named, there’s more to HM10 “Bulldog” than meets the eye. Its hinged jaws open and shut according to the amount of wind left in its mainspring. If you can clearly see the rows of shining teeth lining the jaws, get ready, because that means “Bulldog” is full of fight, charged up with a 45 hours of mainspring energy.

One final piece of advice for those who come across Horological Machine N°10 “Bulldog” is engraved on its body, like a cautionary message you might find on the collar of a particularly feisty canine. The beast may be intimidating, but it ultimately exists in service of another. People would do well to remember — “Forget the dog, beware of the owner”. 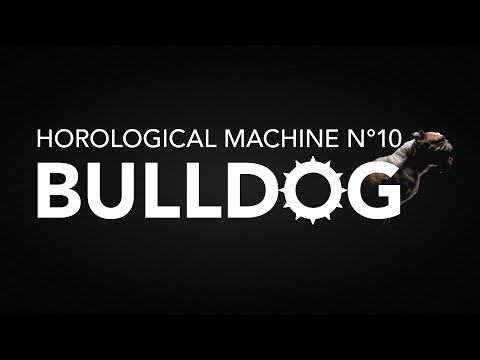 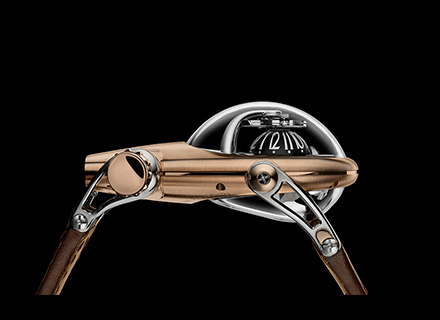 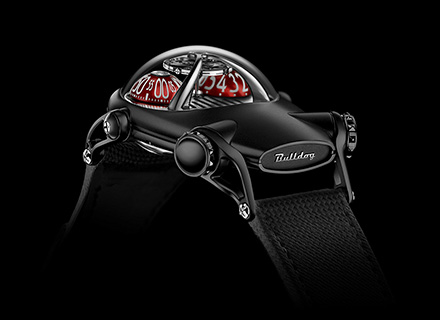 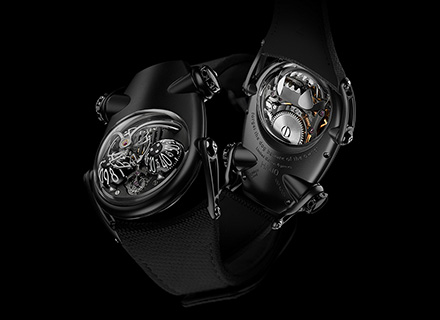 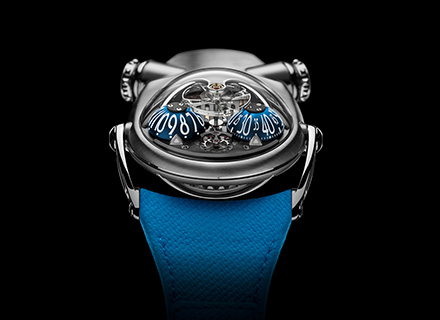 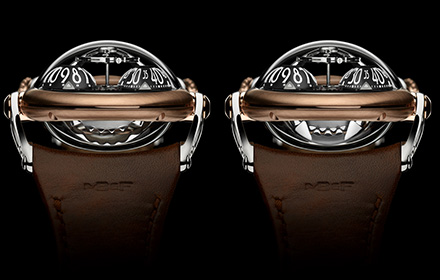 The massive jaws indicate the level of remaining power by opening and closing. The very unconventional power-reserve indication has been carefully designed and calibrated to consume the least energy possible, allowing HM10 Bulldog to direct its considerable mainspring torque towards the suspended balance and revolving hour and minute domes. 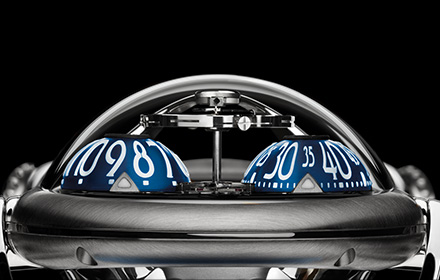 In full sight beneath a bulging sapphire crystal dome, the oversized 14mm balance wheel with four traditional regulating screws flies high above the movement – the brain of this mechanical bulldog. 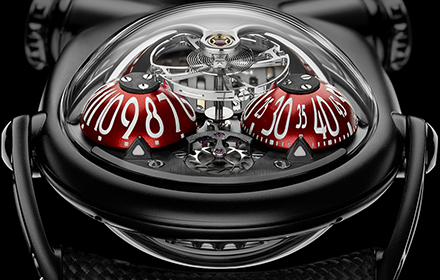 The paper-thin domes indicating hours and minutes are machined from solid aluminium, chosen for its optimal strength to weight ratio: they weigh in at a micro-light 0.5g, reducing energy requirements to an absolute minimum. 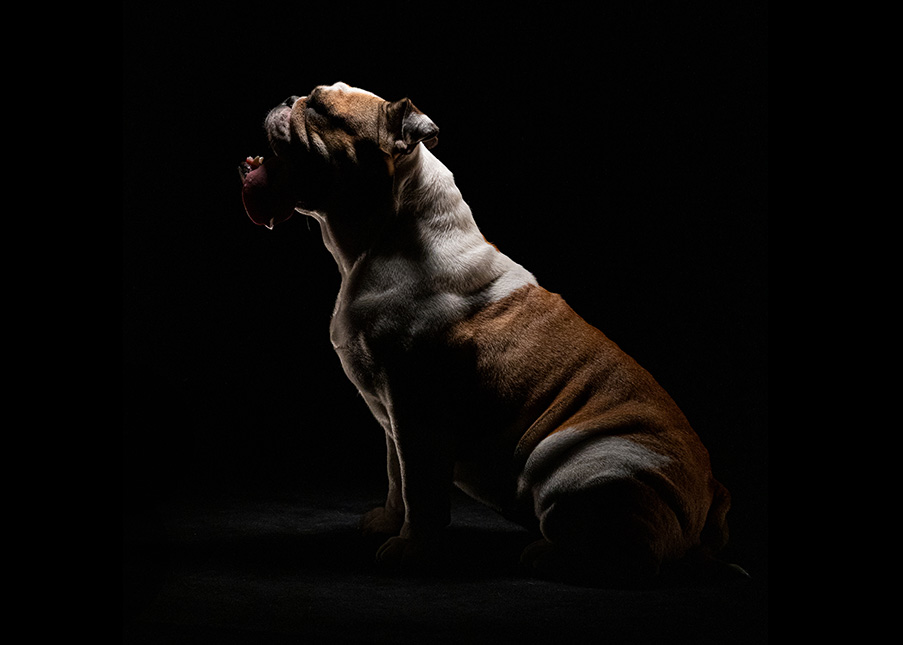 The design came to Maximilian Büsser while he was travelling in Japan; Horological Machine N°10 ‘Bulldog’ bounded up in his mind’s eye just as a loyal pup might greet a returning master.

“What you see now in front of you is more or less exactly what I saw at the time,” says Büsser, “and it was the first time I actually saw a watch in my mind, just like that.”

HM10 Bulldog coalesced from various MB&F influences and motifs that dedicated enthusiasts of the brand will immediately recognise. In a deeply affirmative way, HM10 Bulldog is simultaneously a reflection of MB&F and a paean to the fidelity of their followers. The traditional saying “as stubborn as a bulldog” parallels the determination of MB&F to chart an untraditional path outside of conventional watch design, sometimes with creations that have polarised the horological community. In similar vein, the British bulldog may be a dog of pedigree and stature, but it is certainly no crowd-pleaser. 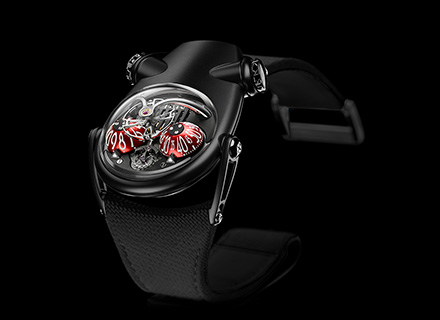 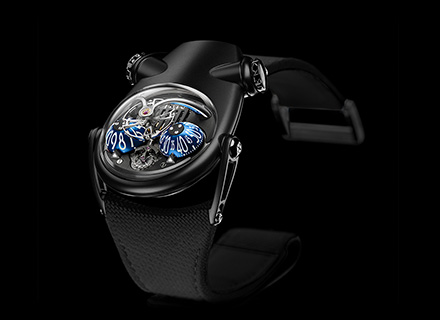 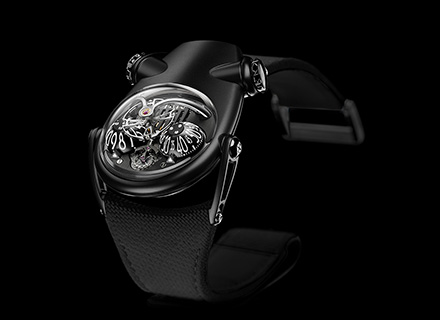 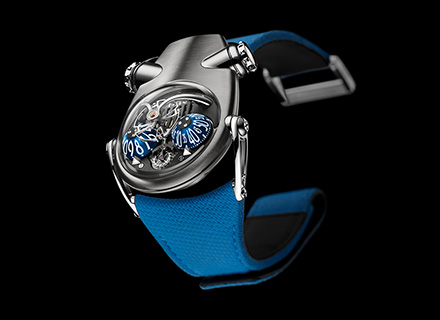 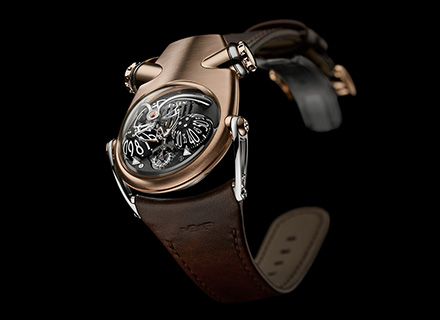